Begonias in the Wild Garden?

This week we have another guest post from my wife Laura Crum who was not impressed with the style of begonias shown in my previous post.  That post was a review of a book about tuberous begonias and how to grow them for competition.   My wife thought the begonias looked too… contrived, or too tame.  She likes things (including gardens) on the wild side.  She leaves those around her both shaken and stirred!

She mentions in her post the On Top® Begonias that have come up a couple of time before.  Originally bred to be able to withstand shipping (which they can do, sort of) they have turned out to be stellar garden performers.

Begonias in the Wild

I have to start out by admitting that the title of this post is sort of a joke. I’m not talking about species begonias here, or wild begonias of any sort. I’m talking about growing tuberous begonias such that they blend into the “wild garden.” I think many other gardeners will relate to the term wild garden, but if not, my wild garden is a motley collection of plants, some truly wild natives, and other introduced exotics, that have naturalized here in my coastal California garden, such that they need very little care. The overall effect of the wild garden is very “ungardeny”. It looks, and is meant to look, as if the plants just happened to grow here. It’s not tidy. It’s not (mostly) flashy. It looks wild. Most people would not call it a garden. I like it like this.

Tuberous begonias are not a likely candidate for such a garden. With their big, hybridized blooms, and their not-at-all drought tolerant ways, they really don’t seem to fit in. Nevertheless I have had some success growing tuberous begonias in some of my mixed plantings, and I really like the effect. This effect is, perhaps, the opposite of what a “show grower” (like the author of the book that Andy reviewed in his previous post) would aim for. I don’t want a few huge dominant flowers dwarfing a spindley plant. I want a long series of flowers that blend in both with the begonia plant and the surrounding plants. And there are some tuberous begonias that can do this quite nicely. And they are surprisingly tough and will come back year after year. Though no, they are sadly not at all drought tolerant. But still, quite worth growing in a mixed planting such as I describe.

My favorite begonias for growing in a mixed planting are the On-Top begonias—a strain called “Sunset Shades.” These are all picotee begonias in a range of warm colors. The plants are smaller than the usual large-flowered tuberous begonia, and the blooms are smaller, too. Thus the plant stays upright without staking. They are still plenty showy and make a real statement in the garden. They bloom reliably from August through November for me. The photo below shows an On-Top Sunset Shades plant in November (in my garden). 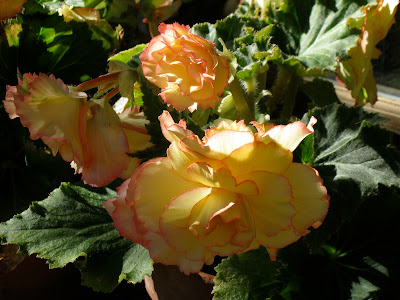 These begonias can be planted in the ground in our climate (zone 9), and they will come back for a few years at least—if gophers don’t eat them. But my preferred way to grow them is in pots, mixed in with pots of other plants. The effect can be very pretty and wild. See below. 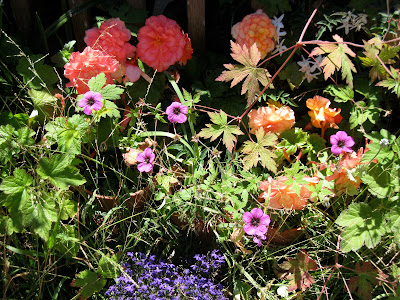 Note the variation in the colors of the begonias, which are all “Sunset Shades”, a seed line. I think this variation is a joy, though I am supposing some folks might call it a fault. The other flowers you see are a magenta geranium, “Ann Folkard”, blue lobelia, and white jasmine. There are leaves of Japanese anemone “September Charm,” which blooms in a soft silver pink. And there is grass and general odds and ends, as befits a wild garden. All the plants are in pots. All of them have been here for several years.

This planting looks interesting all year round, though there are less flowers in the winter. But there are some evergreen plants in the group (a few iris and some cymbidium orchids, a couple of native California wildflowers), and there is always something to look at for an interested gardener. And, of course, if a plant outright dies, I can just jerk its pot out and replace it with something else. Great fun.

So there you have my theory on begonias in the wild—pretty much the opposite of big, flashy begonias bred for shows. Of course, if you want real bling, there is nothing like visiting the begonia growing fields. We took a horseback tour the other day. Very colorful. 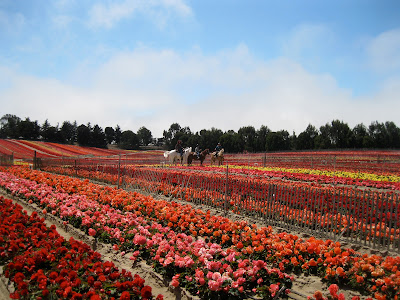 Thanks to my husband. Andy Snow, for allowing me to air my thoughts on begonias (and plants in general) on his blog.