“Don't judge each day by the harvest you reap but by the seeds that you plant.”
― Robert Louis Stevenson

Have you ever thought about seeds?  Seeds are amazing.  Seeds are like little time capsules, little messengers of hope for the future. Planting seeds is to throw your lot in with the future.

Little packets of information.   The tree (or begonia) is not contained in the seed only the code that will unravel, through a complex Boolean network, into it’s own unique natural shape.

“It always amazes me to look at the little, wrinkled brown seeds and think of the rainbows in 'em," said Captain Jim. "When I ponder on them seeds I don't find it nowise hard to believe that we've got souls that'll live in other worlds. You couldn't hardly believe there was life in them tiny things, some no bigger than grains of dust, let alone color and scent, if you hadn't seen the miracle, could you?”
― L.M. Montgomery, Anne's House of Dreams

“Seeds have the power to preserve species, to enhance cultural as well as genetic diversity, to counter economic monopoly and to check the advance of conformity on all its many fronts.”
― Michael Pollan, Second Nature: A Gardener's Education

We have all come from seeds you and I.  Little seeds that were planted on fertile ground.


It now seems likely that all life on this planet came from a seed.

You see, back in the long-ago the world was a tumult.  There were complex chemicals as a result of volcanic and other turmoil but no organization.  The planet was bombarded by meteors and comets.   Into this torment came a seed.  From space.  A template. The template organized the complex molecules so that they could replicate themselves.  I’m not making this stuff up. Several people have written about it.  Read one article here.  The pattern arrived and the complex molecules arranged themselves in the pattern, modified themselves and (using the pattern as a means) passed on their modifications to their off-spring.

All life is pattern.  You and I do not have any part of us that was with us only a few years ago, the only consistency is the pattern.  Your pattern, my pattern.

Life grew from seed, it made multitple models and the patterns grew ever more complex.

So if all life came from a seed, and the seed came from outside, and it found a fertile, warm space to land and to grow, can we literally think this planet is our mother?   Are we unborn in our mothers womb?  The sky is our father, the earth is our mother (sound familiar?).  We can no more imagine what we carbon creatures are to become than an unborn child can imagine breathing air and running in the sun. 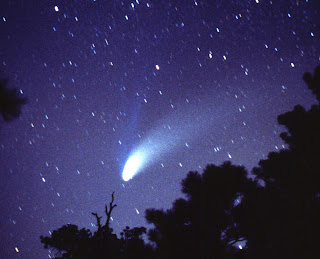 Maybe it’s not reasonable to believe in a star-seed.  But we humans abound with unreasonable beliefs.  Old legends or old documents translated many times by people, each with their own agendas, you know what I mean.

I remember hearing about an anthropologist who visited an island in Indonesia where their cosmology said the universe rested on the back of a turtle (a belief held, by the way by several cultures including some native Americans, Chinese and Hindus).  When interviewing old people living a traditional life style, the anthropologist asked an old lady.
“What does that turtle rest on?”
The old woman answered “Another turtle”
“And what does that turtle rest on?” asked the researcher.
“Don’t start with me, young man” she said wagging her finger at him “It’s turtles, turtles, turtles all the way down”

Yea, I know, funny story.  Are our beliefs any better?

Unquestioned faith doesn’t really make us fully human, does it?  Unquestioned faith is what makes a young man, with his whole life in front of him, blow himself up on a bus crowded with strangers or kill hundreds of people with an airplane, people who have never done him any harm.  Programmed.

Let’s agree not to live by faith, but to live through knowledge.  Don’t let’s mistake what we know for what we believe.

Because of our limits, we can’t see the other side nor move forward with certainty.  We may have an idea about what’s on the other shore and the path to get there, we can have a belief about where we’re going.   We can decide we really believe in our conclusion and have faith we are right.  Let me know what you believe.

I believe in seeds.

To see things in the seed, that is genius.
Lao Tzu