I work with greenhouses.  I need a greenhouse at home like a fish needs a bicycle. A greenhouse at home is just a place for chores to accumulate because there’s always something that needs doing in a greenhouse and it's not like I don’t have enough to do. But the truth is that I always wanted a little greenhouse at home.  I like to grow some of the vegetables we eat and here on the fog coast, we have problems growing things like peppers, tomatoes and cucumbers because the summers are just not warm enough.  I want to grow fresh salad year round.

So we built a little greenhouse.

We discussed it for years, my wife and I.  My wife does not share my appreciation for greenhouses and did not want one of the repellent plastic things in her garden.  We compromised.

Greenhouses are like boats and ships.  Commercial greenhouses are freighters. They are manned by a crew, and even if I am the captain, I don’t pick the ports on which we call.  My little glass and wood house is a sail boat. Instead of harvesting wind for motion, we harvest daylight for heat.  I am the master of this tiny vessel.

Let me take a little time to explain what we have built here.

It’s a SierraGreenhouse.  Redwood and glass with polycarbonate north wall and roof.   Bruce Noble from Sierra Greenhouse was great to work with.  I had plans for a much more elaborate house and he and I exchanged drawings for several months and he never got impatient.  Then we just built one of his small standard greenhouses.

We excavated a pad in the hillside to accommodate the house. 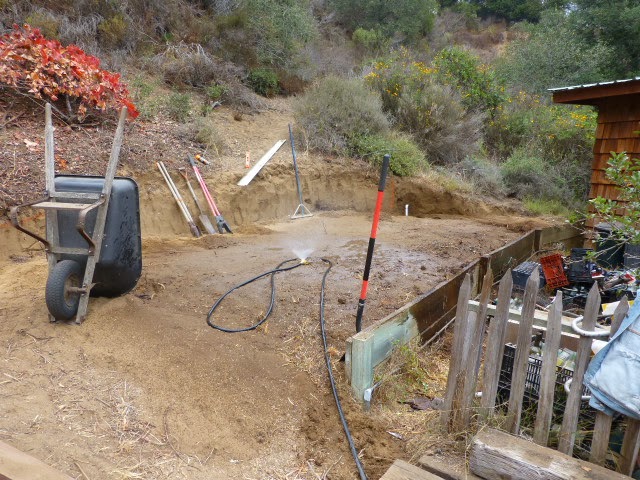 I built a floor inside the foundation. 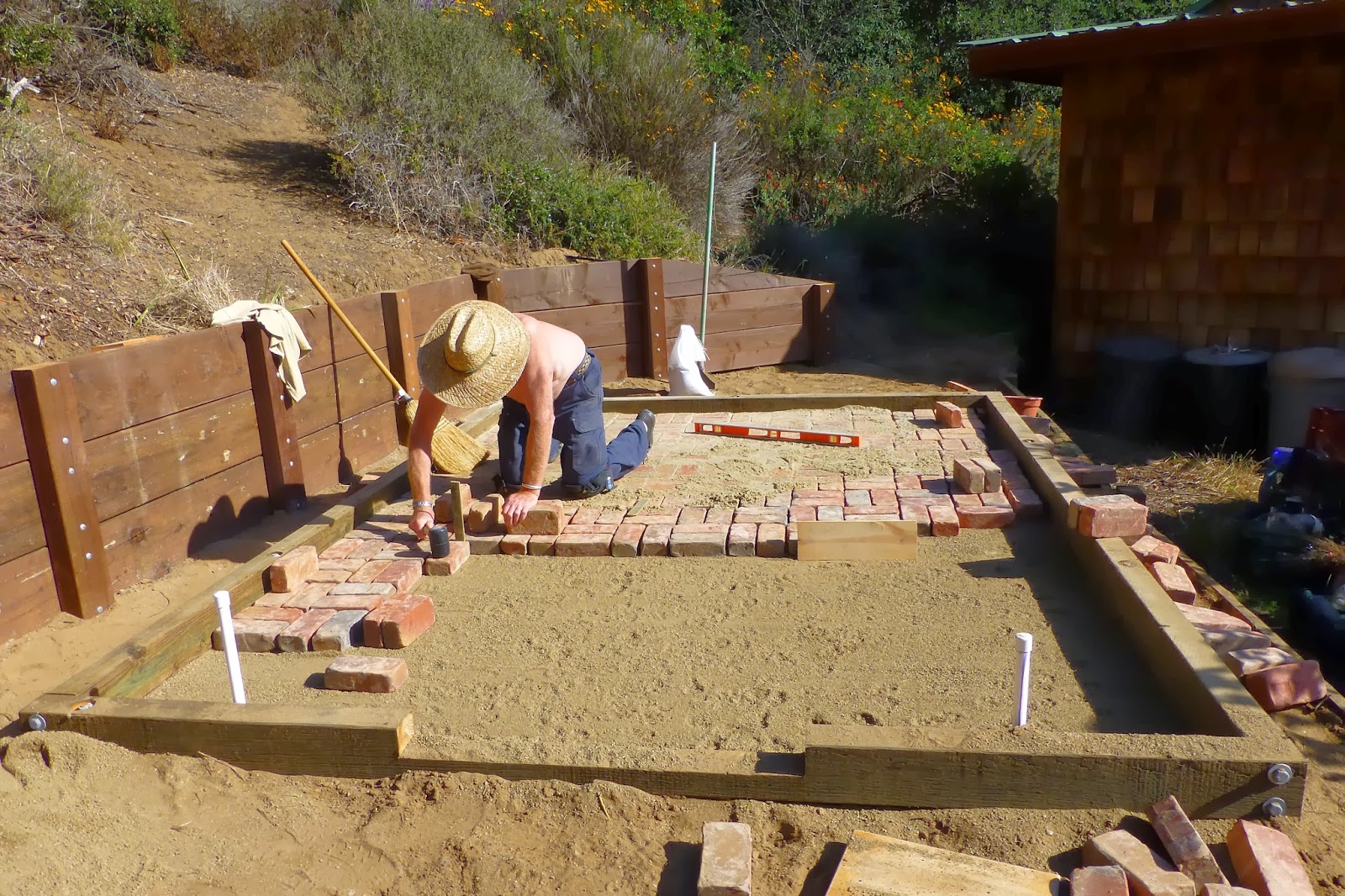 Bruce’s price includes installation.  He builds them in panels at his workshop and sets up the panels on-site.  When he showed up to erect the greenhouse, I told him “I’ve taken a couple days off to help with the work”.  He thanked me but politely declined the help, explaining that if anyone broke a panel, he would have to go back to Placerville (5 hour drive) and make another one.  “If someone breaks a panel, it’s better if it’s me”   So I spent two days sitting on my thumbs and watched him work.  He has obviously built a lot of these, he was very sure and the house went up without a hitch.

I looked at metal and plastic houses too and although you can buy a greenhouse very cheaply (search Harbor Freight), compared to a good quality metal and polycarbonate house, Sierra Greenhouse is very competitive.  I also looked at other wood and glass greenhouses, there are several manufactures, but they all sell kits.  Bruce sells an installed greenhouse.

This greenhouse is part of our living area and we are glad it looks so nice.

There is one thing all greenhouses have in common; they are never big enough.  Every greenhouse I have ever seen gets filled and the grower is looking for places to jam in more plants.  But there are real significant differences besides just size.


The main thing is that little houses heat up faster and cool down quicker than large greenhouses.  The sheer mass of the air in large houses moderates their temperature swings.   After the greenhouse in our yard was built, and before there were any plants inside, I removed the vent controllers just to mess with them a bit.  On the bright cold morning of Christmas eve, the greenhouse went from 50 degrees to 100 degrees in the space of one hour!

When I ordered the greenhouse, I asked Bruce to add some venting both top and bottom but didn’t ask that the lower vents be automated.  In large greenhouses, you can get a lot done with top vents only; the height of the roof vent (that would be 20 feet at GSBG) makes for a good draw, like a chimney, the lower vents are a plus but can open later as a boost to the cooling unless the house is very tight or the day gets very hot. I figured I would just open them during the day when I got around to it (or put opening them on Zak’s chore list). Bruce knew the behavior of small houses better than I   He gave me one vent on the north wall, that I hadn’t ordered, as a gift, and it opens automatically, he said I’d need it, and it’s been much appreciated.

The vents that are automatic on the little greenhouse are opened by some “Univent” controllers. They operate by using a cylinder with wax that expands and contracts with temperature.  They are Ok in their way.  They operate very slowly.  We live in a little hollow in the hills, facing direct south.  But we have a ridge to our east and another to our west.  On a bright winter’s day, when the sun clears the east ridge it is already 9:30 and the sun streams into the glass house and the temperature skyrockets.  The vent opens slowly. It’s frustrating to walk into a 90 degree house with the vents just cracked. At the other end of the day, the sun drops behind the west ridge and the greenhouse vents are open.  Why not, it may still be 75.  But I know that that is it for solar gain today.  Best shut the vents and keep what heat we can.  The vents close very slowly and are not fully closed until we have lost 10 to 15 degrees of plant-sustaining heat.   If you had a greenhouse in a flat plain with horizons to the east and west and the greenhouse heated slowly and cooled the same, these would probably be perfect.  For me they are just OK and I considered just going strictly manual like the old days at the Brown Bulb Ranch.

I am spoiled by computer controlled environmental systems. The cost of these systems are more than I paid for the whole greenhouse, but oh, the control.

Argus controls at Golden State Bulb Growers control 32 separate diurnal environments, both warehouse and greenhouse.  It does this by manipulating 218 pieces of equipment. Argus also monitors other areas that it doesn’t control.  It even controls and monitors the begonia dryer.


There is no logical reason to build a hobby sized greenhouse for vegetable production.  The cost of the Greenhouse would buy a lot of vegetables.   But growing for me was becoming administration and management and most of the real work is delegated .  I don’t pot things at work, someone else does.  I don’t make soil mix anymore, I “cost” it and make recipes for someone else to mix.  I don’t open vents, I “set parameters”.  I review test results and approve bills.   I sure as heck don’t eat begonias. Did you know some people do?

Greenhouses are different in how they behave.  And there are differences between the pleasure they give and the grief and worry they cause.  Our little greenhouse is a pleasure.  When I lay in bed waiting for sleep, I can rest my mind on the projects pending or just remember the sound of the water running in the aquaponic tanks.  The greenhouses at work cause me to wake at night with worry, so many of us are depending on them being right.

Good luck in the future.  -Andy