“Once in a while you get shown the light; In the strangest of places if you look at it right.”
from  “Scarlet Begonias” by the San Francisco band The Grateful Dead.

Well, I’m no Grateful Dead fan, but I am a begonia grower and it’s true you get shown the light in the strangest places, stay with me and I’ll show you.

For 30 years I have been growing tuberous begonias, approximately three million per year.  Let’s see that makes, oh somewhere around 90,000,000 begonias. (no wonder I’m tired).

Before that, I was sort of nomadic.  I left Michigan in 1968 for the corner of Haight and Ashbury, San Francisco.  I traveled to the high Himalayas, sailed the South China Sea. I was always looking for a good light.  I am settled here on the coast of California, where the fog gives a beautiful soft light to fields of begonias.

I don’t want to write a how-to blog about begonias, I can’t, I am no expert on how to grow begonias, but I know some experts.

I want to make a couple things clear.  I do not grow begonias for a hobby.  I am a professional begonia grower.  I work for Golden State Bulb Growers.  We are the developer of the AmeriHybrid begonia.

I don’t however think that makes me a better begonia grower.  I learn all the time from the begonia hobbyist.  The person who grows begonias for a hobby has a passion that I can borrow from and learn from.  For a hobby, I grow vegetables.

I don’t know about different types of begonias.  I know about Begonia X Tuberhybrida.

I learned my trade from Todd Brown, who learned from his father Worth.  Below you see a picture of myself and Todd Brown taken in 1985.  I am studiously taking notes from that years “specific crosses” this is how I learned. (I will talk about that process in future posts)

I first photographed tuberous begonias in the Himalayas ten years earlier.  I didn’t even know what those beautiful flowers were.

Below you see a picture of a Tibetan tending to tuberous begonias on a window sill of Ling Rinpoche’s house in Macleod Gange, above Dharmasala India. 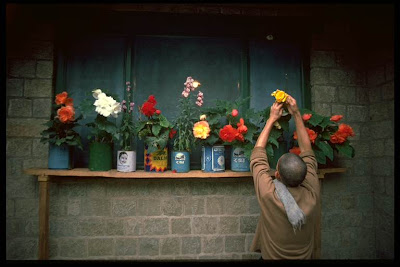 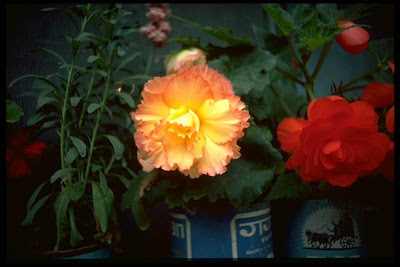 Imagine my surprise when many years later, now working as begonia grower, I finally had the time to go over the hundreds of slides I had taken during my travels and found these photos.  Hey! I know what those are. Those are begonias!

It’s been a long road, one that settled in sandy soil and drifting fog.


I hope we can start a dialogue.  I will try to post at least once per week.