Or: Up from industry.. to what?

“The best is the enemy of the good.” Voltaire

What Voltaire meant by this famous quote is that we often sacrifice what’s right, fine and, good to try for something that’s maybe just a little better.

I know several people that are excellent in their chosen field.  Excellent martial artist, excellent musician.  The thing is, their lives are all screwed up.  Because life is about balance, not extremes. Excellent is extreme.

I am a believer in moderation in all things. Of course you have to include moderation in that equation too.  I mean come on, don’t take your moderation to an extreme. Get excited about something.  Play music ‘till late at night once in a while. Prune your front hedge to look like circus animals and dinosaurs. Or whatever.

What does this have to do with begonias?  Why does it always have to be about begonias?

Judith Taylor in her article, The Begonia in California wrote “The Brown Bulb Ranch grew tuberous begonias on an industrial scale in Capitola for many years. The firm saw the possibilities in the mass market and grew millions of plants each year”

I don’t know about you, but it kind of makes me feel like we’re Folgers coffee or Budweiser Beer.

We’re better than that, maybe not excellent, but good, we were back then and we are more so now.

It is a fact that we have based our business, whether begonia or calla, on seed.  Our company was very involved in developing true seed strains of tuberous begonias (our company history says we ARE the developers of lines that are true for color)  Previous to true lines, all tuberous begonia hybrids were vegetatively propagated and very expensive.  Seed lines enabled us to bring the price of tuberous begonias down and produce millions for the market place.  That’s good, maybe it’s not excellent, but is it industrial?

My job is to breed seed lines that are as good as I can make them.  But the fact is that all seed lines are kind of a crap shoot (except true F1s).  The genes recombine and the dice roll.  I have some lines in which every male bloom is a solid multi-petaled double.  Others, well, not so much.  I look at all our 54 varieties and decide which are the weakest. Then for a few years, we work on those and improve them.

The only other successful seed grown begonia is the Non-Stop.  A popular begonia with smaller flowers suited to garden beds and, so I am told, very popular as cemetery plantings in Europe.  In parts of Canada, Non-Stop is synonymous with tuberous begonia; like Kleenex is synonymous with face tissue, (again something I’ve been told).

Our equivalent to the Non-Stop is the On-Top. Get it? Non-Stop, On-Top.  The difference is ours are all bi-color or picotee because, at the time, we didn’t want to go head-to-head with Non Stops in the market place (they were too cheap).  Now they have picotees too, so it goes.

But our “standard” begonia is the large flowering “exhibition” type begonias (and hanging baskets).  You know, the spectacular ones.

Among the large flowered begonias there are degrees of good.  (And that’s only if we all agree on what’s desired in the realm of floral beauty, other opinions are welcome.)

Our seed lines knocked the socks off of Antonelli's seed lines.  I know, I grew Antonelli's begonias.  They brought me their seed and I returned to them tubers.  They had their own mother stock and genetics.  From their mother stock they took cuttings.   They called them Antonelli’s Champions.  They were all identical.  The best they had (we have those plants now).

Blackmore and Langdon.  Great begonias. There's a mark for us to shoot at.  We could pick on them for this or that, I don’t like the fact that some have weak stems and don’t hold up the flowers very well.  But then again, the flowers are often huge.  Vegetatively propagated.  Expensive.

In some ways, cloning begonias is easier, you only have to find one good one.

The breeding may be easier but the production is harder and therefore, more expensive.

We vegetatively propagate only our Scented Begonias.

We used to have a program of named varieties that we (inside the company) called “Stake Stock” that were selected (staked) while the plants were in bloom and then hand dug before the Green Monster went through the field.  I’ve tried to reinstitute that program a couple time, with no success.  The sales department didn’t sell them, the warehouse crew threw them out and when  I sent a couple of the tubers to Paul Carlisle and I saw them in his greenhouse, I was not impressed with the results.  We will have to improve our performance if we want reinvigorate that program.  Next year, I will make the selections myself.

So, the question is, and why I started writing all this about three pages ago is this; I am wondering if we should start a vegetatively propagated begonia program for more than just Scented Begonias?  It’ll be two years before the first ones could come along.

Should we have three degrees of good;  the Clones, the Stake Stock and the Seed Lines?

Other news and note in our tuberous begonia world.  Paul Carlisle and his lovely wife Laurel had a great article in the “Begonian”, which is the magazine of the American Begonia Society.  Great article, great photos and a wonderful cover shot by Gary Hunt. 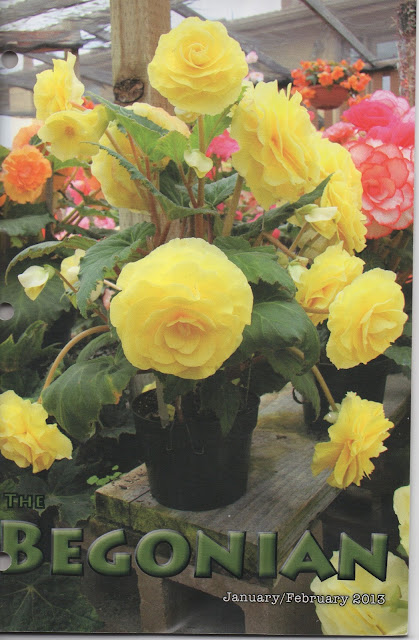 For more of photos of Paul’s begonias by Gary Hunt clink here.

For an article I wrote about Paul click here.