Warning, this post contains a lengthy description of our begonia breeding program, I am afraid it will be terribly boring for the general reader (and maybe everyone else too).

When I became the begonia breeder for Golden State Bulb Growers (at that time the Brown Bulb Ranch) the Begonia x Tuberhybrida was already a well established product with a world wide market.  Tuberous begonias were among the first begonia species to be hybridized.

I am happy to give a history of tuberous begonia breeding, but I am sure that information is available elsewhere.

Although I have messed around with species begonias, my real work has always been within the established hybrids.

Growing tuberous begonias from seed for tubers is our business, and it has an inherent problem that the vegetative producer does not face.  Our goal is perfectly formed, large male flower (It is the male flower that is so showy).  The ideal flower is, however, sterile.  So, we must keep some imperfect flowering plants around to provide pollen.  Pollen is our most precious commodity, not seed.  Give me good pollen, I will produce enough good seed.  Good pollen comes late, or some years, not at all.  A plant that will contribute it’s pollen but not its characteristic for imperfect flowers in rare.  The resulting crosses are therefore not entirely uniformly perfect.  I strive, as a breeder to keep the percentages of good double flowers high, in some types it approaches 100%, other types; not so much.

In a previous post, I showed an old photo of myself and Todd Brown grading crosses in Marina.

We used these crosses to evaluate our mother stock.  We would take the pollen from one pollen plant (called a “sire”) and put it on a specific seed parent (called a “dam”) we would hang a little paper tag on the pod that received the pollen with both parent’s numbers.  In this way we could grade the mother stock by looking at the crosses.  We would, for example, look at a series of plantings where the only difference was the sire, same dam.  We could then deduce that any variation in the population was due to the sire.  Also, if all the crosses were bad, we could deduce that the sire was not so good.  Same was done where the sire was the same, different dams, same deductive procedure.  We graded for both flowers and plant form because we are always looking for crosses that present the bloom well. We also brought in unique individuals we found for future mother stock.

In this way we rated our mother stock plants from A to C with plus and minus, making 10 grades.  We wrote out a score card for each plant that stayed with the tuber.  This score card would record how it performed in crosses, how reliable the pollen production is (if a sire) and other characteristics .  Every year we rewrote the score card adding that years information.  With over 6,000 mother stock writing the cards was a big job.  Every year we discarded the mother stock that got the worse grades and added pots from our previous years selections.

Below you see a picture of me making crosses in the 80s, the score cards are clearly visible in the photo.  The thing around my neck is a metal holder that contains a rectangular piece of glass that has been painted black on the back side, this was used for collecting pollen that was applied to the female flower (begonias being monoecious) using a small brush. 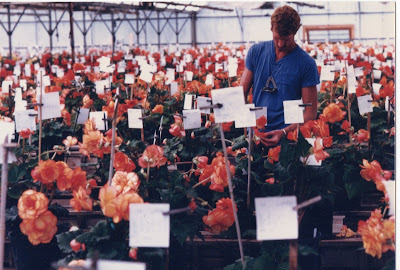 We would arrange the mother stock pots on the bench by type, then by the grade of the individual.  For example, the first pot on the bench would be the highest graded sire, the next one the second graded sire etc. After the sires came the dams, highest rated first.  We would also cut our highest rated parents.  This arranging was done so that the pollinator would take all the available pollen from the highest rated sire and only after that was exhausted, go to the second highest rated.  Conversely, if only a small amount of pollen was available, it would go on the highest rated dam.  All female flowers had to be pollinated or picked so that no dud pods would be processed.  When we pollinate a flower, we nick a petal with our fingernails to show the work is done and not waste additional pollen on that flower again.

After a few years, it became obvious that a better solution was to find the one best cross, whatever the parents, and make that cross over and over again until a better one could be found.  This was achieved by actively cutting the best parents until we had enough pollen and seed parents to supply all the seed we needed.  Recently, we have been able to do this with tissue culture. This is easier said than done, some individual begonias just do not take well from cuttings, unless you take a bit of tuber with the cutting, I don’t know why.  The same ones that don’t cut well, don’t tissue culture well. (If anyone reading this has a good cutting protocol, can you please share it in the comments.)

The only danger in this improvement in our seed production, is that it is tempting to discard mother stock plants that are not, anymore, being used for production.  There is an economic incentive to keep the mother stock as lean as possible.  We therefore risk losing genetic diversity.  We keep old seed and seed from past crosses as well as a good selection of non-productive plants for this reason.

Plant breeders sometimes use inbreeding as a technique and Worth Brown mentions using this tool with begonias, in his book “Tuberous Begonias” published in 1948.  We also use inbreeding to get new types and make improvements in existing types.  Begonias do not take well to being inbred and the breeder soon loses germination and vigor.  However, it is much easier to get that one characteristic your looking for. You can inbreed either by putting the plants pollen on it’s own female flowers called a “self” on the another individual with the exact same parents called a “sib” (short for sibling).

In order to pull this program off, you have to have two lines going with the characteristic you want.  The two lines are not related.  When both lines come true, no mater how weak they seem, you can re-combine the two lines and get back the hybrid vigor that you lost during inbreeding.  Sometime times further work is needed past the F1 stage to make a fully marketable plant.

Using this technique, we were able to develop the On Top® line within a relatively short time.

Because we have been breeding with our own material so much, I am always on the look-out for new material.  In the past I have traded seed with Australian begonia breeders.   Recently, Antonelli Brothers, a long time begonia breeder with which we have had a long relationship, went out of business and we were able to acquire their mother stock; a beautiful collection of plants that gives us lots of opportunity to combine the two lines and make something better than either one on it’s own.

All plant breeders must make compromises. The plant breeder must make decisions about what one or two characteristics he values most and must make his selections based on those criteria.  As it often happens, those traits he, or his superiors, don’t value are the traits that sometimes haunt him later.

I was taught to always breed with the plant in mind, not to make decisions on which hybrid is better based on it’s ability to produce large tubers. This is true despite the fact that we are a bulb company and charge according to tuber size. Big tubers make us money.  Some of our crosses, like the Dark Leaf Red are horrible tuber sizers, I would be doing my company a favor if I could improve it’s ability to make larger tubers.

Other companies do select for bulb size. It’s kind of a running joke in Belgium that the breeder goes thorough the bulb trays, in the storage shed after harvest, and picks the largest tubers for his breeding/production program.  Maybe it’s just a joke but I’ve heard it from several places.

Below you see a me grading crosses at the Manresa ranch in La Selva Beach a couple years ago.  I am making notes on a little Palm thing.  The stick under my arm is to enable me to reach across the bed and tip a flower so I can see it. 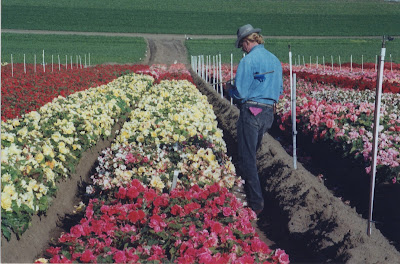 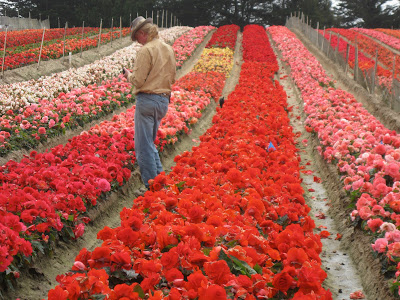 Below is a shot of cross #12012200. A pink roseform. Notice the high percent of fully double flowers and how they are presented on top of the plant.  This looks like it may be a good cross! 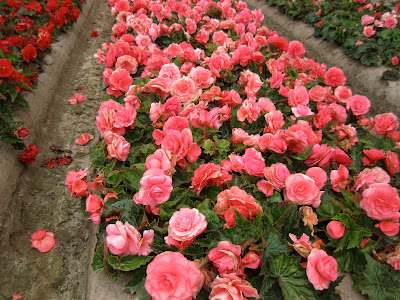 Using these techniques, Golden State Bulb Growers has been able to produce products unique on the world market.  Our lace begonia series, a reverse picotee, is not available from other begonia breeders.  As a result, we sell seed of this series to large begonia tuber producers in Europe.  In fact, European begonia producers produce more tubers of this series than we do here in the States, all from seed we sold to them.

Our Daffodil Begonia is an old type first noted as a mutant variety in 1896, we have kept this type in breeding and in production and have made improvements.  It is considered very rare.  J. Haegeman in his book Tuberous Begonias notes them as being variously named “B. Tubereauz a fleur de narcisse”, “Daffodil-flowered begonia”, “B. narcissiflora” and several other names.  He finishes the chapter on this begonia by writing “As this group is no longer found in commerce, any discussion of its name has only a theoretical value.”  Well, it is still in commerce and we are the only ones to have it.  It is, in my opinion, a product for a collector not for the person who likes an easy to grow large flowered begonia.

Breeding programs are expensive and their pay back is very long.  Sales of the product have to support the program.  When sales are slow, the breeding is the first thing to be limited.